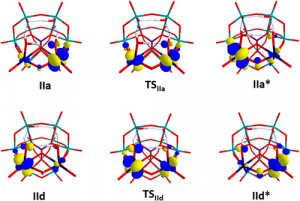 The photoreduction of a Keggin type lacunary tungstomolybdophosphate, α-(Bu4N)4[H3PW9Mo2O39], in acetonitrile, led to the formation of a monoreduced lacunary heteropoly anion, or a one electron reduced “heteropoly blue” species, whereby the added “blue” electron was captured by the molybdenum atoms. The magnetic properties and behavior of the “blue” electron were studied by a modified Evans nuclear magnetic resonance method (small downshift of the 31P signal) and variable-temperature electron paramagnetic resonance (g=1.936 for MoV). The intermolecular exchange of the “blue” electron was limited by a geometrical factor, which requires the contact between Mo caps to exchange it between the heteropoly couple. The intramolecular exchange of the “blue” electron between Mo atoms was rather fast (5.3×109 s−1), with a rate of more than six orders of magnitude larger than the intermolecular exchange rate. Density functional theory was used to determine the most prevalent protonation sites in the mixed lacunary isomers with the aim of studying the intramolecular electron transfer pathway in the isolated [H4PW9Mo2O39]4− species. The singly occupied molecular orbital (SOMO) is essentially localized in one of the two nonequivalent molybdenum sites. The kinetics of the intramolecular electron exchange equilibrium MoV + MoVI → MoVI + MoV between the two molybdenum atoms bridged by an oxygen atom was found to be fast in agreement with the experimental result. The transition state is of mixed-valence type, with the SOMO delocalized over the Mo—O—Mo group. Spectroscopic parameters were found to be in fair agreement with experimental results.