A recent paper, first-authored by Marisa Maia, junior scientist at the Grapevine-Pathogen Systems Lab, at Ciências ULisboa, with the participation of Andreia Figueiredo, principal investigator of the same lab, reports, for the first time,  that the localisation of a specific metabolite is associated to P. viticola (the downy mildew pathogen) infection sites. If you want to know more about this paper, published in the journal Frontiers in Plant Science , read the BioISI Digest below.

It is well known in the research community the importance of metabolites (small molecules present in the cells which are required for, example, the maintenance, growth, defense and normal function of the organism) in plants. However, information is scarce on their real location in the tissues and if their location changes upon any stress.

Our aim was to identify the metabolites that are accumulated near the infection areas. We have inoculated a susceptible grapevine cultivar with Plasmopara viticola (the downy mildew pathogen) and through Mass Spectrometry imaging, we associated metabolite distribution across the sample section in a label-free and non-targeted mode with the pathogen infection sites.

Our results have shown for the first time that a metabolite putatively identified as sucrose presents a higher accumulation and a non-homogeneous distribution in the infected areas of grapevine leaves. This accumulation was mainly located on the veins of the leaf, suggesting a link between this metabolite and the development of P. viticola infection structures. These findings lead us to hypothesize that host sucrose metabolism is being manipulated by P. viticola.

Up to our knowledge this is the first time that the localisation of a specific metabolite is associated to P. viticola infection sites.

If you had to explain the main finding to a 5-year-old child, how would you do it?

When you are in a flower garden and you catch a particular smell, you would like to know which flower has that scent. Now imagine that the flowers are so tiny that you are not able to see them, but you had the possibility, by using a novel scientific technique to identify precisely where that scent is. In our study we know that when plants are attacked by pathogens, they produce some compounds that accumulate nearby the pathogen entry site, but they are so tiny we cannot see them.  In our study we were able to use that specific scientific technique to “see” the compounds that grapevine is producing and where they are produced. We were able to see that a particular sugar (like the ones in the lollipop) was produced and accumulated near this pathogen and this led us to think that probably the pathogen really likes sweets and is making the grapevine to produce those sugars so he might eat them.

Our findings demonstrate that this novel technique can be used in complex samples, such as grapevine leaves, showing a great potential for application to other plant leaves. It also shows that we are now able to specifically locate compounds in tissues. By precisely locating metabolites in plant tissues, we might associate their production to particular stimuli and to further understand host metabolism dynamics and its manipulation by pathogens.

There is still a lot of work to be done in this field mainly in tissue collection and storage, sample preparation, and analysis, which have many pitfalls that can critically affect Mass Spectrometry Imaging results. Moreover, protocols need to be adjusted and the equipment used for the analysis should be carefully selected as it can generate different results.

But if it wasn’t a challenge, it maybe would not drive us to know more and more. 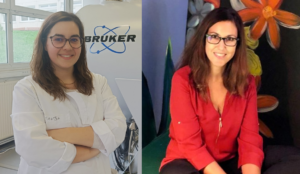 From left to right: Marisa Maia and Andreia Figueiredo [images provided by the researchers]