Margarida Baleiras-Couto, principal investigator from the Microbiology & Biotechnology Group, and her team, published a new scientific paper in the journal Foods, reporting that the type of microorganisms present in the Arbutus unedo fruit fermentation process have an impact on the  chemical and sensorial characteristics  of the distillates to be used in the production of  spirit bevareges.

Know all the details underlying this finding, that can help producers incresase the value of their regional products, by reading the BioISI Digest below.

There has been a growing interest in the strawberry tree (the plant that bears the arbutus unedo fruit – in portuguese: medronho) culture, for economic and ecological purposes. These fruits are also important sources of bioactive compounds.  The fermentation of Arbutus unedo fruits for the production of distillates is traditionally carried out spontaneously and can last for several months. The starting point of this research was to know more about the indigenous fermenting yeast Saccharomyces cerevisiae and the putative influence on the chemical and sensorial characteristics of the distillates.

A high level of yeasts was present during the fermentation process, with most isolates characterized as S. cerevisiae. The analysis of their genetic distance showed a great diversity, and most isolates were grouped by producer. The results of the analytical determinations and sensorial analysis also showed a great discrimination between producers. A possible association between the characteristics of the distillates and the specific microbiota is hypothesized.

There are very few studies on the autochthonous microbiota present in the alcoholic fermentation of Arbutus unedo fruits. The characterisation of the indigenous yeasts can be an important contribution for the preservation of the specific characteristics of Arbutus unedo spirits and a differentiating factor for local products, increasing the intrinsic value of regional products.

It is foreseen the selection of autochthonous yeast isolates and their study in controlled fermentations.

Get to know the Microbiology & Biotechology Group here. 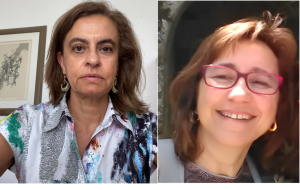 From left to right: Margarida Baleiras-Couto and Filomena Duarte (authors) [photos provided by the researchers].

bioisicom@fc.ul.pt2022-07-18T14:10:01+00:00
We use cookies on our website to give you the most relevant experience by remembering your preferences and repeat visits. By clicking “Accept All”, you consent to the use of ALL the cookies. However, you may visit "Cookie Settings" to provide a controlled consent.
Cookie SettingsAccept All
Manage consent