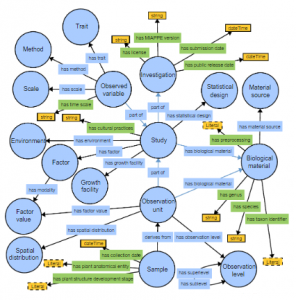 Enabling data reuse and knowledge discovery is increasingly critical in modern science, and requires an effort towards standardising data publication practices. This is particularly challenging in the plant phenotyping domain, due to its complexity and heterogeneity.
We have produced the MIAPPE 1.1 release, which enhances the existing MIAPPE standard in coverage, to support perennial plants, in structure, through an explicit data model, and in clarity, through deﬁnitions and examples.
We evaluated MIAPPE 1.1 by using it to express several heterogeneous phenotyping experiments in a range of different formats, to demonstrate its applicability and the interoperability between the various implementations. Furthermore, the extended coverage is demonstrated by the fact that one of the datasets could not have been described under MIAPPE 1.0.
MIAPPE 1.1 marks a major step towards enabling plant phenotyping data reusability,thanks to its extended coverage, and especially the formalisation of its data model, which facilitates its implementation in different formats. Community feedback has been critical to this development, and will be a key part of ensuring adoption of the standard.