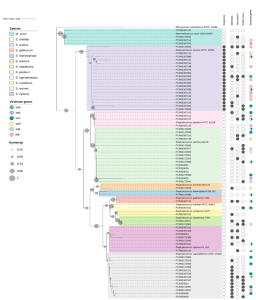 Food poisoning by staphylococcal enterotoxins (SE) is a major cause of foodborne illness, often associated with coagulase-positive staphylococci (CPS). The increase in the number of methicillin-resistant Staphylococcus aureus (MRSA) strains is another major problem associated with CPS. However, reports of the association of SE and methicillin-resistant Staphylococcus with coagulase-negative staphylococci (CNS) are beginning to re-emerge. In this context, the aim of this study is to investigate the presence of staphylococcal enterotoxin genes and to characterize the phenotypic and genotypic antimicrobial resistance in 66 isolates of Staphylococcus spp. (47 CNS and 19 CPS) recovered from ready-to-eat (RTE) street food sold in Maputo, Mozambique. Seven virulence genes encoding SE (sea, seb, sec, sed and see) and two toxins (hlb and sak) were screened by multiplex PCR (MPCR). Antimicrobial resistance against 12 antibiotics was evaluated by the disk diffusion method. The presence of genes encoding resistance to penicillin, methicillin, vancomycin and erythromycin (blaZ, mecA, vancA, vancB, ermA, ermB and ermC) were also screened by PCR. At least one of the seven virulence genes assessed in this study was detected in 57.9% and 51% of CPS and CNS isolates, respectively. In CPS isolates, the most frequent gene was hlb (47.4%), followed by sec (15.8%) and sea, seb and sed genes with 5.3% each. In CNS isolates, the most frequent gene was sec (36.2%) followed by sak (17%), hlb (14.9%), sed (12.8%) and seb (6.4%). Five of the twelve CPS in which virulence genes were detected were also antibiotic-resistant. All the CNS isolates harboring virulence genes (n = 27, 57.4%) were antimicrobial-resistant. The prevalence of multidrug resistance was higher (59.6%) in CNS than in CPS (26.3%) isolates. Regarding the presence of antibiotic-resistance genes, blaZ (penicillin-resistant) was the most frequent in both CPS (42.1%) and CNS (87.2%), followed by the mecA (encoding methicillin resistance) and vancA genes (vancomycin-resistant), which represented 36.8% and 31.6% in CPS isolates and 46.8% in CNS isolates, respectively. The prevalence of vancomycin-resistant staphylococci has been increasing worldwide and, to our knowledge, this is the first study to report the occurrence of vancomycin-resistant staphylococci in Mozambique. These results emphasize the need to investigate CNS isolates in parallel with CPS, as both constitute public health hazards, given their potential to produce SE and spread antimicrobial resistance genes.

bioisicom@fc.ul.pt2022-06-21T14:53:58+00:00
We use cookies on our website to give you the most relevant experience by remembering your preferences and repeat visits. By clicking “Accept All”, you consent to the use of ALL the cookies. However, you may visit "Cookie Settings" to provide a controlled consent.
Cookie SettingsAccept All
Manage consent