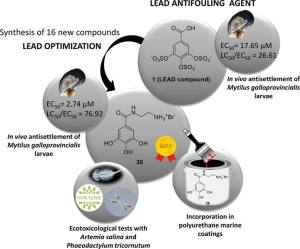 The addition of biocides to marine coatings has been the most used solution to avoid marine biofouling, however they are persistent, bioaccumulative, and toxic (PBT) to marine ecosystems. The development of natural products or Nature-inspired synthetic compounds to replace these harmfull biocides has been pursued as one of the most promising antifouling (AF) alternatives. Following a bioprospection strategy, we have previously reported the AF activity of gallic acid persulfate (1) against the settlement of Mytilus galloprovincialis larvae (EC50 = 18 µM and LC50/EC50 = 27) without exhibiting ecotoxicity to Artemia salina. In this work, a lead optimization strategy was applied to compound 1 in order to improve potency while maintaining a low ecotoxicity profile. In this direction, twenty-seven compounds were synthesized, from which eighteen were obtained for the first time. An AF screening was performed against the settlement of mussel M. galloprovincialis larvae and derivative 26, 2-(3,4,5-trihydroxybenzamido)ethan-1-aminium bromide, was found to be more potent (EC50 = 3 µM and LC50/EC50 = 73) than compound 1 and the biocide Econea® (EC50 = 4 µM). The potential impact on neurotransmission, and ecotoxicity against two non-target marine organisms was also evaluated. Marine polyurethane (PU)-based coatings containing compound 26 were prepared and lower adherence of mussel larvae was observed compared to compound 26 free PU-coatings. Studies concerning the leaching of compound 26 from the prepared coating were also conducted, and < 10% of this compound was detected after 45 days of submersion in water. Overall, we have optimized the potency against the settlement of mussels of our initial lead compound, not compromising the toxicity and compatibility with PU-based coatings.