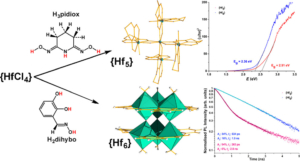 Hafnium(IV) molecular species have gained increasing attention due to their numerous applications ranging from high-resolution nanolithography, heterogeneous catalysis, and electronics to the design of molecule-based building blocks in metal–organic frameworks (MOFs), with applications in gas separation, sorption, luminescence sensing, and interim storage of radioactive waste. Despite great potential, their chemistry is relatively underdeveloped. Here, we use strong chelators (2Z-6Z)-piperidine-2,6-dione (H3pidiox) and 2,3-dihydroxybenzaldehyde oxime (H3dihybo) to synthesize the first ever reported pentanuclear {Hf5/H3pidiox} and hexanuclear {Hf6/H3dihybo} clusters (HfOCs). The {Hf6} clusters adopt unique core structures [Hf6IV(μ3-O)2(μ-O)3] with a trigonal-prismatic arrangement of the six hafnium atoms and have been characterized via single-crystal X-ray diffraction analysis, UV–vis spectroscopy in the solid state, NMR, fluorescence spectroscopy, and high-resolution mass spectrometry in solution. One-dimensional (1D) and two-dimensional (2D) 1H NMR and mass spectroscopies reveal the exceptional thermodynamic stability of the HfOCs in solution. Interestingly, the conjunction of the oxime group with the catechol resulted in the remarkable reduction of the clusters’ band gap, below 2.51 eV. Another prominent feature is the occurrence of pronounced metalloaromaticity of the triangular {Hf3} metallic component revealed by its NICSzz scan curve calculated by means of density functional theory (DFT). The NICSzz(1) value of −44.6 ppm is considerably higher than the −29.7 ppm found at the same level of theory for the benzene ring. Finally, we investigated the luminescence properties of the clusters where 1 emits light in the violet region despite the lack of fluorescence of the free H3pidiox ligand, whereas the {Hf6} 3 shifts the violet-emitting light of the H3dihybo to lower energy. DFT calculations show that this fluorescence behavior stems from ligand-centered molecular orbital transitions and that HfIV coordination has a modulating effect on the photophysics of these HfOCs. This work not only represents a significant milestone in the construction of stable low-band-gap multinuclear HfIV clusters with unique structural features and metal-centered aromaticity but also reveals the potential of Hf(IV) molecule-based materials with applications in sensing, catalysis, and electronic devices.

Know more about this research by clicking the image to check our digest. 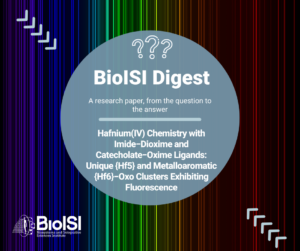