A walk on the wild side: Wild ungulates as potential reservoirs of multi-drug resistant bacteria and genes, including Escherichia coli harbouring CTX-M beta-lactamases

A walk on the wild side: Wild ungulates as potential reservoirs of multi-drug resistant bacteria and genes, including Escherichia coli harbouring CTX-M beta-lactamases 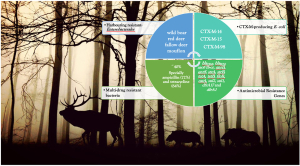 Extended-spectrum β-lactamases (ESBL)-producing Enterobacterales have been classified as critical priority pathogens by the World Health Organization (WHO). ESBL are universally distributed and, in 2006, were firstly reported on a wild animal. Understanding the relative contributions of wild animals to ESBL circulation in the environment is urgently needed. In this work, we have conducted a nationwide study in Portugal to investigate the occurrence of bacteria carrying clinically significant antimicrobial resistance genes (ARG), using widely distributed wild ungulates as model species. A total of 151 antimicrobial resistant-Enterobacterales isolates were detected from 181 wild ungulates: 50% (44/88) of isolates from wild boar (Sus scrofa), 40.3% (25/62) from red deer (Cervus elaphus), 41.4% (12/29) from fallow deer (Dama dama) and 100% (2/2) from mouflon (Ovis aries subsp. musimon). Selected isolates showed a diversified resistance profile, with particularly high values corresponding to ampicillin (71.5%) and tetracycline (63.6%). Enterobacterales strains carried blaTEM, tetA, tetB, sul2, sul1 or dfrA1 ARG genes. They also carried blaCTX-M-type genes, which are prevalent in human infections, namely CTX-M-14, CTX-M-15 and CTX-M-98. Strikingly, this is the first report of CTX-M-98 in wildlife. Almost 40% (n = 59) of Enterobacterales were multi-drug resistant. The diversity of plasmids carried by ESBL isolates was remarkable, including IncF, K and P. This study highlights the potential role of wild ungulates as environmental reservoirs of CTX-M ESBL-producing E. coli and in the spill-over of AMR bacteria and their determinants. Our findings suggest that wild ungulates are useful as strategic sentinel species of AMR in terrestrial environments, especially in response to potential sources of anthropogenic pollution, providing early warning of potential risks to human, animal and environmental health.

bioisicom@fc.ul.pt2022-06-21T10:12:11+00:00
We use cookies on our website to give you the most relevant experience by remembering your preferences and repeat visits. By clicking “Accept All”, you consent to the use of ALL the cookies. However, you may visit "Cookie Settings" to provide a controlled consent.
Cookie SettingsAccept All
Manage consent