Olive Fungal Epiphytic Communities Are Affected by Their Maturation Stage

Olive Fungal Epiphytic Communities Are Affected by Their Maturation Stage 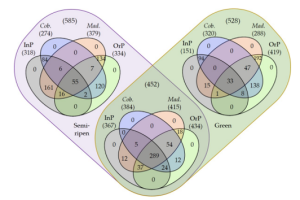 The phyllosphere comprises the aerial parts of plants and is colonized by a great diversity of microorganisms, either growing inside (as endophytes) or on the surface (as epiphytes) of plant tissues. The factors that structure the diversity of epiphytes and the importance of these microorganisms for host plant protection have been less studied when compared to the case of endophytes. In this work, the epiphytic fungal communities from fruits of the olive tree (olives) in different maturation stages (green and semi-ripened), obtained from different olive orchard managements (integrated and organic production) and from distinct cultivars displaying different susceptibilities to olive anthracnose (Cobrançosa and Madural), are compared by using a metabarcoding approach. We discuss whether such differences in host resistance against anthracnose depend on both the fungal taxa or fungal community composition. A total of 1565 amplicon sequence variants (ASVs) were obtained, mainly belonging to the Ascomycota phylum and Saccharomycetes class. Although significant differences on epiphytic fungal richness were observed among olives obtained in different production systems and maturation stages, these factors in addition to host cultivar did not influence the composition of the epiphytes. Despite these results, a co-inertia analysis showed that Aureobasidium spp. and Sporocadaceae spp. were positively associated with the green olives of the cv. Madural produced under integrated production, while Saccharomycetales spp. (Kluyveromyces, Candida, Kazachstania and Saccharomyces) were positively associated with the semi-ripened olives of the cv. Cobrançosa obtained from organic production. The discriminant power of these fungi, some of them recognized as biocontrol agents, suggest that they might be important in conferring differences on host plant susceptibility to anthracnose.