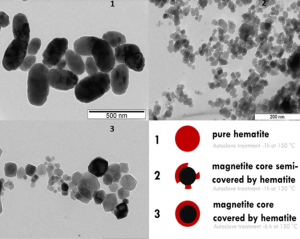 The increased use of pharmaceutical and personal care products (PPCPs) has contributed to the contamination of water systems and put pressure on the development of new techniques to deal with this problem. Acetaminophen (paracetamol), a common analgesic and antipyretic drug, and caffeine, a known central nervous system stimulant, are being used frequently by many people and found in large amounts in wastewater systems. In this work, their removal, by photocatalytic degradation, was promoted using magnetic nanoparticles (NPs) based on iron oxides. Besides being obtained from cheap and plentiful source, the magnetic properties of these NPs provide an easy way to separate them from the solution when the reaction is complete. Three types of hematite-based NPs, one pure (1) and two of them composed by a magnetite core partially (2) or completely (3) covered by a hematite shell, were synthesized and characterized. Sample 2 was the best photocatalyst for both pollutants’ photo-assisted degradation. Under UV-vis irradiation and using a 0.13 g catalyst/L solution, the total acetaminophen and caffeine degradation (20 ppm/150 mL) was achieved in 45 min and 60 min, respectively. The identification of some of the intermediate products was carried out by liquid chromatography in combination with electrospray ionization mass spectrometry. A complementary Density Functional Theory (DFT) study revealed the relative stability of several species formed during the acetaminophen and caffeine degradation processes and gave some insight about the most favorable degradation pathways.

bioisicom@fc.ul.pt2021-09-16T11:45:22+00:00
We use cookies on our website to give you the most relevant experience by remembering your preferences and repeat visits. By clicking “Accept All”, you consent to the use of ALL the cookies. However, you may visit "Cookie Settings" to provide a controlled consent.
Cookie SettingsAccept All
Manage consent