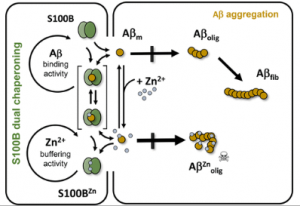 Amyloid beta (Aβ) aggregation and imbalance of metal ions are major hallmarks of Alzheimer’s disease (AD). Indeed, amyloid plaques of AD patients are enriched in zinc and Aβ42, and AD related-cognitive decline is dependent on extracellular zinc concentration. In vitro, zinc induces the formation of polymorphic Aβ42 oligomers that delay the formation of amyloid fibers at the expense of increased cellular toxicity. S100B is an inflammatory alarmin and one of the most abundant proteins in the brain and is upregulated in AD and associated with amyloid plaques, where it exerts extracellular functions. Recent findings have uncovered novel neuroprotective functions for S100B as a suppressor of Aβ aggregation and toxicity and in the regulation of zinc homeostasis in neurons. Here we combine biophysical and kinetic approaches to demonstrate that such S100B protective functions converge, making the protein a dual-function chaperone capable of suppressing the formation of toxic Aβ oligomers through both chelation of zinc and inhibition of protein aggregation. From detailed kinetic analysis of Aβ42 aggregation monitoring ThT fluorescence, we show that substoichiometric S100B prevents the formation of toxic off-pathway oligomers that are formed by monomeric Aβ42 in the presence of zinc. Indeed, S100B is effective when added during the lag and transition phases of Aβ42 aggregation, and its action under these circumstances results from its ability to buffer zinc, as it perfectly mimics the effect obtained with the chelating agent EDTA. Further, bioimaging analysis combining transmission electron microscopy and atomic force microscopy confirms that catalytic amounts of S100B partly revert the formation of toxic oligomers. Taken together these results indicate a new role for S100B as a dual chaperone whose distinct functions are interrelated and depend on the relative levels of zinc, S100B, and Aβ, which dynamically evolve during AD.

bioisicom@fc.ul.pt2021-01-11T21:46:52+00:00
We use cookies on our website to give you the most relevant experience by remembering your preferences and repeat visits. By clicking “Accept All”, you consent to the use of ALL the cookies. However, you may visit "Cookie Settings" to provide a controlled consent.
Cookie SettingsAccept All
Manage consent