Last November 15, it took place the Rede Saúde ULisboa Awards Cerimony, at ULisboa’s Rectory. Margarida Simões, currently PhD student at the Protein Misfolding and Amyloids in Biomedicine Lab, Functional Genomics & Proteostasis Research Group at Ciências ULisboa, was one of the awardeees and was distinguished with  the best MSc. research work award.

“Single-domain antibodies targeting S100B as tools in Alzheimer’s disease” is the title of the thesis Margarida produced while still of a MSc. student at Claudio Gomes’ Lab. The young researcher focused her work on the response given by single-domain antibodies (previously generated at the Lab in collaboration with Nanobodies4Instruct center at the Vrije Universeit Brussel) raised against the S100B protein. This protein is found to be very abundant in the brain and to be implicated in neurodegeneration, for instance in Alzheimer’s Disease (AD). Therefore, Margarida’s work gives us more clues on the mechanisms of the disease as it is suggested that the mentioned antibodies activate S100B protective chaperone (another protein) activity or modulate the aggregation of proteins implicated in AD.

The young scientist feels very happy by being distinguished with this award as she shares that: “This award recognizes research that I am very enthusiastic about, and which I think has a great potential and relevance in the biomedical arena.” Furthermore, it is not only the scientific value of the research developed that makes Margarida pleased. It is also that she felt supported and guided throughout the process: “Moreover, this award is the outcome  of a year of intense but rewarding research work, that I developed under the guidance of my supervisor professor Cláudio M. Gomes, with  other lab members that were always extremely supportive, and to which of all I am grateful.”, says the researcher.

Besides the happiness Margarida feels towards the award, she is also more motivated than before to keep going with her research. In fact, she attests that: “This award is an additional motivation to continue my work as I felt its potential recognized”. The researcher concludes by opening the veil towards the next steps of this investigation: “I seek to explore more deeply how these single-domain antibodies operate as novel promising biological modulators on protein aggregation in Alzheimer’s Disease, hopefully uncovering their potential as research, therapeutics, and diagnostic tools.”

Find out more about Protein Misfolding and Amyloids in Biomedicine Lab here. 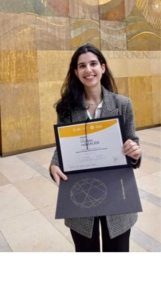